It is only fair to be curious about that monument, which nature has craved so magnificently. Yes, of course, we are talking about the towering peak of all, Mount Everest at 8,848 meters. Thousands of adventurers make their way towards this majestic peak, to conquer it and have the glory, and there are even more people out there who have this dare in their bucket list. 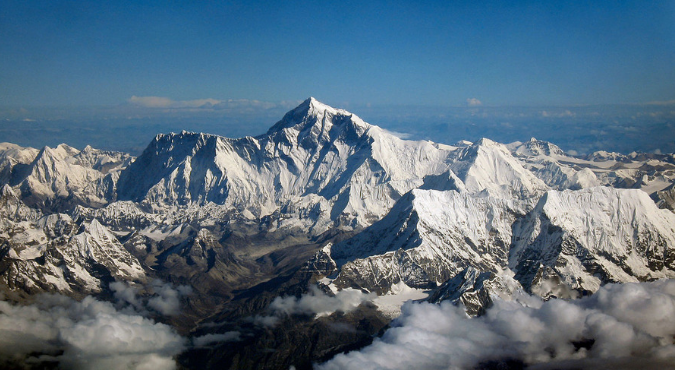 But, as they search on where exactly is this incredible peak location, they get some confusing answers. Some suggest it is located in Nepal, while some point out towards China – well, what's the truth?

Even for the sake of curiosity, knowing about the tallest peak in the world might come handy for you. So, let dive into the mystery of where is Mount Everest located.

Where is Mount Everest?

Mount Everest lies in the Mahalangur Himal which is a section of the Himalayas that includes four tallest mountain in the world including the Everest itself. The other three peaks are Lhotse, Makalu, and Cho Oyu.

Khumbu region of Nepal side is the best known populated part of Mahalangur Himala as it is on the typical trail route towards Everest.

In which country does Mount Everest lie in?

There is quite a confusion on whether Mount Everest is in Nepal or China; well, the answer is both. Yes, Everest shares an area with both of this country. Everest was first scaled up by two climbers in 1953; Tenzing Norgay Sherpa and Edmund Hilary, of whom Tenzing is a Nepali himself.

As Mahalangur Himal lies in the northeast of Nepal and south-central Tibet of China extending from Nangpa La pass between Rolwaling Himal and Cho Oyu to Arun River, Mount Everest is the property of two different countries.

Everest lies within the periphery of Sagarmatha National Park of Solukhumbu District on the Nepal Side. While on the Tibetan side, it is located in Tingri County in Xigaze area, which China considers as an autonomous region and a part of the People’s Republic of China.

Is Mount Everest accessible from both sides?

As Everest lies in two sides, the climb is possible from two sides; southeast side of Nepal and North Ridge of Tibet. However, the southeast route in Nepal is known as the “standard route”.

To ascend via the southeast ridge, the summit begins from the base camp at 5,380 meters. In total, four different camps are set throughout the expedition. As the height of 8,848 meters above sea level is a dangerous place, climbers spend less than half an hour on the summit, so they can allow enough time to descend to Camp IV before darkness arrives, to avoid any serious problem with afternoon weather or because they might run out of supplemental oxygen.

Talking about another route to scale Everest from the north ridge of Tibet, the journey begins with an expedition trek to Rongbuk Glacier setting up a base camp at 5,180 meters. This side of the Everest expedition is more strenuous, and a total of six camps is set en route.

Which side is more accessible to climb Mount Everest?

South route is the main climbing route to Everest. The route is more direct and steep than the North side of Tibet. It definitely means climbing is somewhat more difficult, but it also means that a climber can get down to safety more quickly than Southside.

What is more important is, from Nepal side, helicopter evacuation is possible from Base Camp and Camp I above Khumbu Icefall, which is not allowed from the Tibet side.

From Camp IV, the climbers will face a final push. It takes around 10-12 hours of journey to set the foot at the summit of Everest.

Although the climbers from the Tibet side won’t have to face any threat of icefall, they have to deal with the rigors of high altitude much longer than the climbers of the south side.

One major drawback of this side is, there is no helicopter evacuation. If in case, a climber gets into trouble, then he/she needs to get down to Chinese Base Camo for evacuation by vehicle nearest hospital. Weather is another setback, which is much worse, mainly the winds, which sometimes reach the force of the hurricane.

Now, that you have become quite familiar with both sides, you know that Southeast side from Nepal is a much better and safer choice. It is true that Northside is often cheaper, but there are few things above cost that one must consider.

First of all, the south side has a higher success rate, and Northside has a higher death rate. Also, the Tibetan plateau is consistently between 4,500 and 5,000 meters, so you cannot escape from the high altitude environment, and it is dry and dusty and can be extremely cold.

While Southside of Nepal is safer and warmer and rescue in a distinct possibility. In case, if you start facing difficulty, then you can descend to Base Camp for a few days and drop down to Pangbohce where you can rest and recuperate. In addition, there is a much better acclimatization schedule on the Nepal side.

China Closed Everest Base Camp. Why?

Being the tallest mountain in the world, Everest acts as the major attraction and is visited by thousands of people, which has lead to unmanaged waste. Along with the problem of human waste, trashes like spent oxygen tanks, abandoned tents, empty cans, and bottles have disrupted the beauty of Everest.

So, in February 2019, China restricted the number of climbers to Mount Everest from the north side by up to one-third for a major clean up of Everest. The climbers will be limited to fewer than 300.

According to the reports, the cleanup effort would include the recovery of bodies who died at the “death zone,” above 8,000 meters. However, you are allowed to go as far as the Rongbuk Monastery.

While on the Nepalese side, organizers of mountaineering expedition have already begun sending large waste bags with a climber to collect the wastes that can be winched by helicopters back to the base camp.

How hard is it to climb Mount Everest?

Certainly, to conquer the tallest mountain in the world is not a piece of cake. It is extremely cold up there, where can get 20 mph winds and temperature of minus 40 or more. The weather is so extreme that your drinking water might be all frozen too.

Altitude sickness is a major threat while scaling to Everest. It is also said that Everest is hardest because it is the highest. The climb is very dangerous because it is located at such a highest height.

On the very base camp of Everest, there is only half as much oxygen in the air as there is at sea level.

Then, there is “death zone,” altitude higher than 8,000 meters, which is, just like its name suggests is the most dangerous zone while scaling up to Everest. Climbers typically spend their substantial time within the death zone, where they face significant challenges to survival.

In the death zone, the temperature can drop to a very low level that can result in frostbite if any body part is exposed in the air. Also, the low temperature has well-frozen snow and death or injury by slipping and falling can happen. The reasons are usually lack of oxygen, extreme cold, climbing hazards, and exhaustion that causes death.

Even a study has shown that it is indeed the “death zone,” where most of the Everest deaths occur, but not to forget that most of the death occurrs during the descend from the summit of Everest.