The different geographical settlements in Nepal is defined by various ethnic groups, mainly in the Himalayan and Hilly region. It is rather an interesting venture to witness when a village or a place inhabited by a certain ethnic group. The settlement is like a close group of community, a family in a bigger frame. 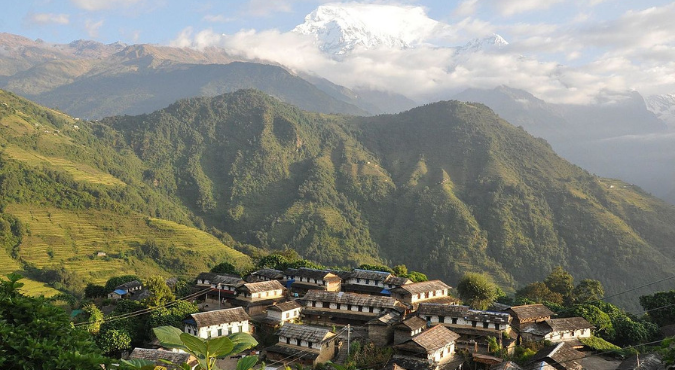 One of such famous Himalayan settlement by a distinctive group in Nepal is Sherpas in the Everest region. However, throughout the country, many of such settlements prevail. Sherpas, Tamang, Sarki and Limbu ethnic group is majorly settled in the Himalayan region. Rai, Chhetri, Brahmin, Magar, and Newar are in Hilly, and likewise, Tharu, Maithali are found in the Terai region.

That’s why the villages in Nepal are one major attraction for tourists as they get a chance to be a part of different culture and tradition, which are still intact and authentic and observe the generations-old lifestyle.

Ghandruk is one of such villages in Nepal which has enticed trekkers to embark towards it. It is popular Himalayan settlement known for the excellent exhibition of unique culture, natural scenery, and an incredible panorama of snow-capped mountains.

In recent years, Ghandruk has garnered a lot of popularity. Located in the trekking-haven of Nepal, Annapurna region, Ghandruk is a beautiful Gurung village amid the landscape of hills and mountains.

The village is also referred to as Stone Village and Konda in the local language.

Ghandruk is a mountain village at an elevation of 1,940 meters/6,364 feet in the Modi Khola Valley in the northern-central part of Nepal. The village is sought-after as the short scenic trek in Nepal.

However, not only the trek but Ghandruk is also a major recruitment center for the famous Gurkha soldiers and the hub of Annapurna Conservation Area Project that boosts different cultural and linguistic groups and rich biodiversity.

Of several treks in the Annapurna region, the short trek to Ghandruk is no less popular. The trek is perfect if you are short in time, or a beginner trekker, a solo trekker, or on vacation in Nepal with the family.

The delightful cultural village surrounded by a verdant hill with the mesmerizing Himalayas in the backdrop; all draped in the pristine serenity, Ghandruk trek is a remarkable short trek in the foothills of the Himalayas. 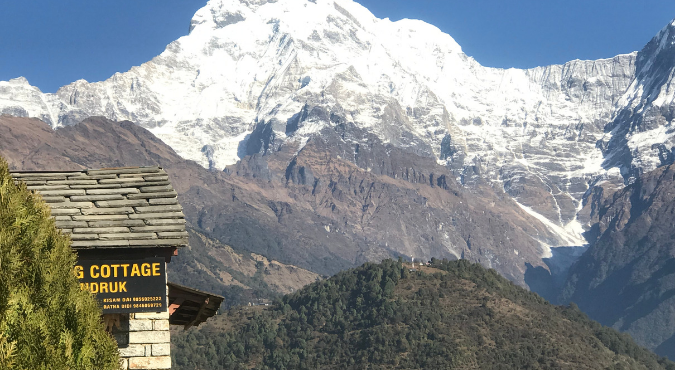 The standard Ghandruk trek itinerary is of two days which starts from the beautiful valley of Pokhara. It takes about a half-hour drive from Pokhara to Nayapul, and then we start trekking towards Ghandruk. After around 4-5 hours of trek, we will arrive at Ghandruk Village.

Exploring the Ghandruk Village for the rest of the day, in our second day, we trekked back to Nayapul and be back at Pokhara the very same day.

However, what's even more in trend is combining Poon Hill trek with Ghandruk. As both are treks in the Annapurna region, there are trails that cross these treks. So, you can always extend the itinerary and combine these two beautiful treks.

One of the major attractions of Ghandruk trek is the Gurung Village and the showcase of their distinctive culture and practice. Traditional two-storey prefab houses, ages-old practices, Gurung language, and traditional dress, are some of the features of Gurung Village in Ghandruk.

Enough of seeing, the village also allows you to be a part of it by entertaining visitors with cultural Gurung dances and give an opportunity to wear traditional Gurung dresses and ornaments. So, you can flaunt on the beautiful Gurung attire and enjoy having local cuisine. You can also have experience of horse riding in Ghandruk.

Ghandruk is a beautiful picturesque village which is one of the popularly visited places by trekkers in Annapurna region. This Himalayan village is known for the magnificent and unobstructed view of mountains including Annapurna South (7,219 meters), Gangapurna (7,455 meters), Machhapuchhre/Fishtail (6,993 meters), Hiunchuli (6,441 meters) and several other big and small mountains.

The short journey to Ghandruk is no less rewarding than the challenging ones when it comes to being blessed with the view of the mountain range.

As you arrive in Ghandruk, you will see the village is all surrounded by the forested green hills that makes the trek even more appealing. Although the village welcomes a considerable number of visitors every year, Ghandruk has maintained its pristine beauty with lush greenery all around. 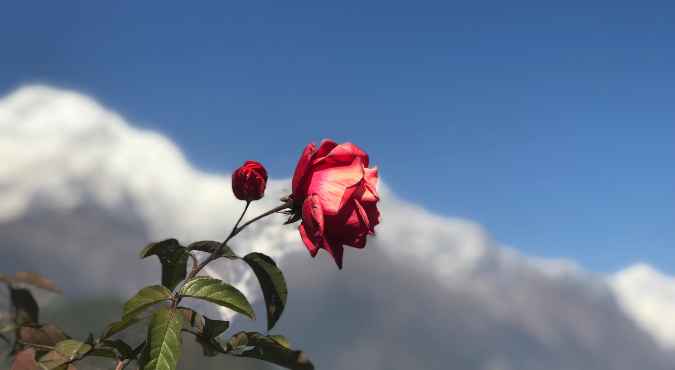 Ghandruk trek also offers the delightful and colorful forest of bright rhododendron while en route. The very setting amid the mountains and hills bolsters the serene beauty as well.

Ghandruk Village is the hub of Gurung culture and community. The Old Gurung museum is inside a typical traditional Gurung house that reflects the Gurung lifestyle. In the ground floor, there are objects labeled in English with a small description of their use. 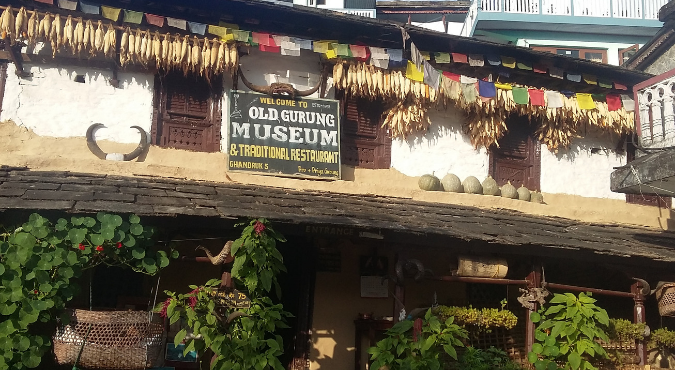 Objects of day to day use like a straw basket for storing grain, woven tightly to keep mice out, bamboo fence strong enough to keep a buffalo in, bamboo milk containers of different size for cow, sheep or goat milk and so on. Bamboo is a widely used material for baskets, house, cages for chickens and fences.

There is wool blanket with designs in colors like beige, brown, and ivory are also in the exhibition. Wooden musical instruments, wooden containers, shiny brass pots and pans, platters, plates, bowls and cups, and weapons are the part of Old Gurung Museum as well.

If you are more interested in Gurung Culture, you can request to try on traditional Gurung clothing. The dress is available for both women and men.

Ghandruk trek provides full accommodation in a hotel throughout the trek. You don’t have to worry about getting hotels packed in Ghandruk trek as there are enough hotels and guesthouse.

Moreover, the village has also started homestay to uplift the socio-economic condition of the village. Don’t expect the extravagant stay, the hotels and homestay have a typical thatched stone-built roof, stone-paved yard, small court area, a warm bed, and delicious Nepali Dal, Bhat and Tarkari.

Before embarking on any destination, you must collect all the essentials. For Ghandruk trek, you will need the Annapurna Conservation Area Project (ACAP) permit and Trekkers Information Management System (TIMS) card.

You will need a passport and 4 pp size photos for ACAP permit and TIMS card. Either Kathmandu or Pokhara, both of these places provide the required permit. And, remember, you will be charged double cost, if you obtain ACAP permit on the way in checking point.

Is Pokhara to Ghandruk by bus/jeep possible?

It takes around three hours drive to reach Pokhara from Kathmandu. Moving further for Ghandruk Village, we take a taxi/local bus to reach Nayapul (taxi are very expensive, but fast too).

An express bus will take you to Nayapul in around 2 hours, and non-express will take around 4-5 hours.

Now, form Nayapul, trekkers have two options; to trek entirely to Ghandruk village which takes around 6 hours for a distance of 9 km, or to take a local bus or jeep to lower Ghandruk and trek for the next hour. Either way, you will have to trek.

So, to reach the Ghandruk Village solely by vehicle is not accessible yet.