With the beautiful snowcapped peaks in the Himalayan range, Nepal is one of the best destinations for trekking and mountaineering. Along with the majestic mountains lies quaint settlement of people in Himalayan region.

There are many hidden and remote villages and valleys which are far from the touch of modernity. Out of many such settlements which has a distinctive culture and traditional setting, Khumbu region is one of the popular and beautiful valley of Nepal. The trails of Khumbu has some of the most spectacular views of mountains with the tallest and glorious, Everest along with Lhotse, Nuptse, Pumori, and Ama Dablam.

Ama Dablam is located in Himalaya ranges of eastern Nepal. The mountain comprises two peaks; mean peak at an elevation of 6,812 meters and another, the lower western peak at 6,710 meters.

Ama Dablam, the name means “Mother’s necklace” because of the long ridges on each side of peak like the arms of a mother (ama) protecting her child, and hanging glacier as dablam, the traditional double-pendent containing pictures of god which is worn by Sherpa women.

Ama Dablam is also referred as “Matterhorn of the Himalayas” because of its soaring ridges and steep faces. Even if you are not on Ama Dablam trek, the peak dominates the eastern sky for anyone trekking to Mount Everest base camp.

About Ama Dablam Base Camp Trek

Ama Dablam Base Camp trek is popular introductory trek in the Everest region of Nepal. The trek takes you to some of the famous Buddhist villages mostly inhabitant by Sherpas with monasteries, chortens, and gompas which depicts the typical lifestyle and tradition of Himalayas which are set against the unparalleled views of some of the tallest peaks in the world.

While on trek, a 360-degree panorama mountain view that culminates in distinctive summit of Everest looming above the Nuptse-Lhotse has awed all the trekkers. A little further than Ama Dablam base camp trek takes to the Sherpa villages of Khumjung and Khunde were we can witness the school and hospital established by Sir Edmund Hillary himself.

Ama Dablam was climbed for the first time on 13 March 1961 via the Southwest Ridge. All the expedition team members were well-acclimatized to altitude, having wintered over at 5,800 meters near the base of the peaks as part of Silver-Hut Scientific Expedition of 1960-61, led by Sir Edmund Hillary.

Walk in the vicinity of Ama Dablam: Jiri to Everest Base Camp Trek

Causalities have also occurred while climbing Ama Dablam, on a high and steep mountain in an extreme environment. One of the big fatality was on November 2006 when a large serac collapsed occurring from the hanging glacier which swept away several tents at Camp III killing six climbers.

As per the eyewitness of the accident, camp three had not been placed in an unusual or abnormally dangerous spot and that the serac fall was of such magnitude as to render the specific placing of tents at camp three irrelevant. 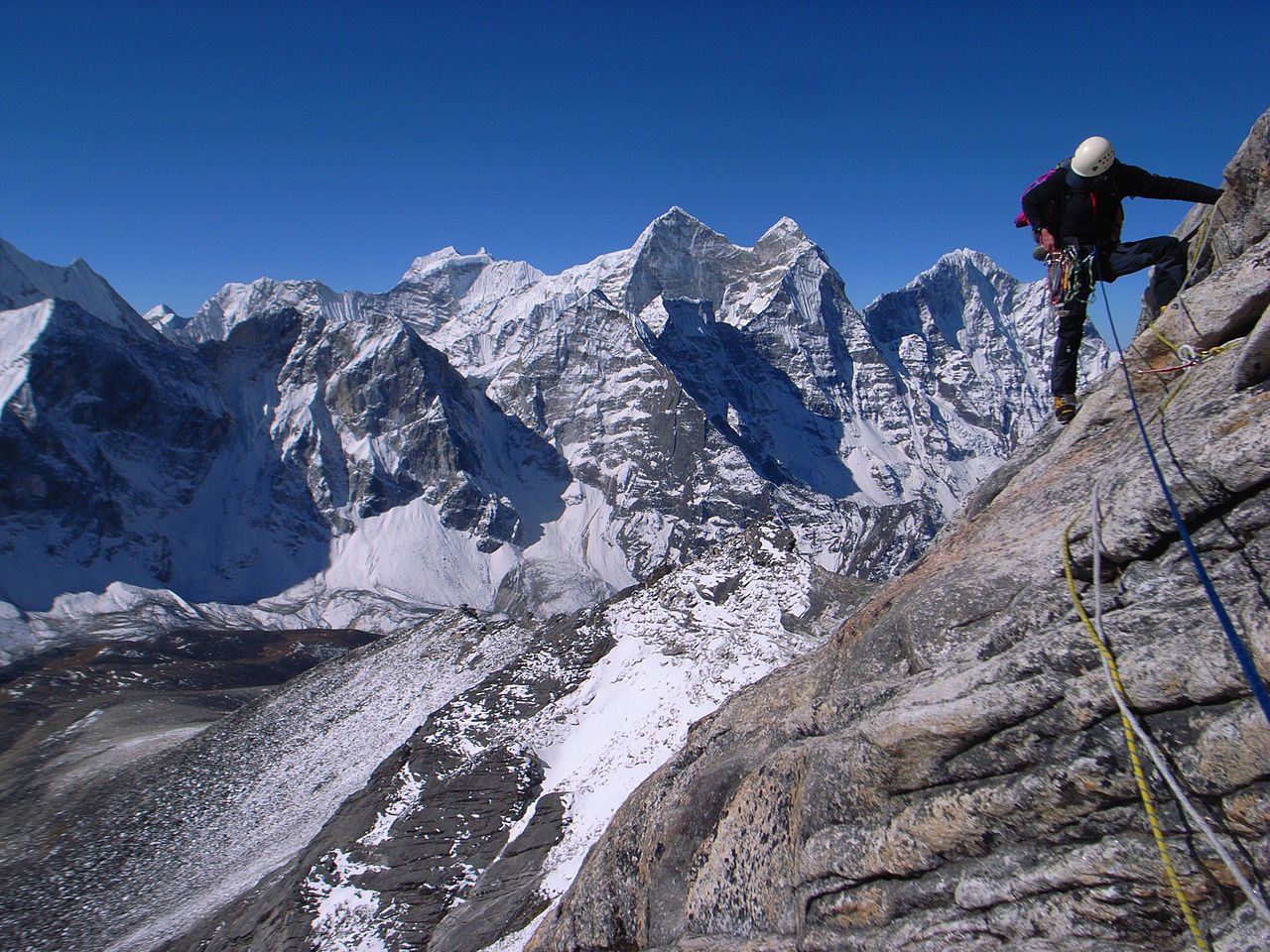 Another casualty was in 2017 of November when Valery Rozav was killed after jumping from mountain in a wingsuit and struck in a cliff.

But, despite the causalities in past, the beauty of this peak attracts tourist all the same. It is also the third most popular Himalayan peak for permitted expedition and southwest ridge is by far the most popular route to summit. The climbers of this peak typically set three camps along the ridge with Camp III just below and to the right of hanging glacier, the Dablam. If in case any ice calves off the glacier, it goes to the left away from the camp.

Getting towards Ama Dablam Base Camp

Ama Dablam Base Camp trek starts from a flight to Kathmandu to Lukla. Flying to Lukla is not always guaranteed because it has maximum chances of flight cancellation due to bad weather condition. Lukla is a very popular place and is known as the gateway to the glorious peak of Mount Everest. The flight is a very thrilling experience as the airport of Lukla is often cited as one of the most dangerous airports in the world.

Visting Lukla itself is perfect for adrenaline lover and thrill seeker who wish to see the majestic Everest in front of them. Lukla is also the most visited trekking route to Everest Base Camp and Gokyo Valley trek.

Lukla never fails to impress with the stunning snowcapped peak that surrounds the traditional villages. From Lukla we trek downhill towards the river of Dudh Koshi, a soaring river originated from the mountain peaks. The trails are broad and well-marked meanders around fields of potato and buckwheat. We will pass through some small villages and row of trees while paving our way to our overnight stay in camp at Ghat.

Moving on from Ghat, we will cross the Dudh Koshi river several times as it reappears in trail. The name Dudh Koshi means Milk River in Nepal, because of its white color. Today we'll walk through verdant pine forest and cleared areas revealing terraced fields and several varieties of crops. As you move on, the spectacular view of Himalayas unfolds above us. We will also cross another river named Kusum Khola, a tributary stream to Dudh Koshi and Kusum Kangru at 6369 meters can be sighted in the east. Other peaks including Nupla, Kongde Ri and Thamserku comes along the trail and keeps on surprising with its beauty.

Now we move towards Namche Bazaar. This day we pass through the gates of Sagarmatha National Park as well. Walking along the trail, we follow the river course to the confluence of Dudh Koshi and Bhote Koshi and cross a very high and thrilling bridge before heading to Namche, also known as Sherpa capital of Nepal. The trail gets tough as we pass through pine forest to a vantage point that provides our first view of Everest. We will continue to walk along the trail and meander to Namche.

On Our Way Further

Namche Bazaar is place where trekkers usually stay for acclimatization. Namche is splendid and culturally rich village spread within a horseshoe-shaped valley against the beautiful peak of Kongde Ri. Today we can explore the beauty and diversity of Nepal. The headquarter of Sagarmatha National Park is in the vicinity of Namche where you can see some interesting display of photographs, memorabilia, and information of the park.  Around us will be the stunning mountain peaks of Lhotse, Taweche, Thamserku, Kantega, Nuptse and Ama Dablam and of course, the Everest rises at the head of the valley. Namche is also a very popular tourist hub which offers a very interesting collection of mountaineering and photographs.

Moving further on from Namche, we will trek towards Dingboche. On our way today, we will see the view of Ama Dablam all along in the right side. The trail towards Dengboche is really a spectacular one. It meanders easily around the ridges, and the Everest is seen very clearly on the horizon ahead before we descend through beautiful rhododendron forests. Crossing the white water of Dudh Koshi, we begin to ascend towards the top of a long ridge, which flows from the summit of Kantega. Then walking along the pine and rhododendron forest, ridgeline and chortens, we will arrive at Tengboche. After resting for a while and visiting the Tengboche monastery, we will head downhill to Dingboche.

The next day after an overnight stay in Dingboche, we trek above Tengboche and towards conifer forest. We will continue following the path through forest that leads above the tree line to summer yak pasture and contour around the ridge line of Kantega. A small settlement of Omogo also comes along the way, and we hike towards Mingbo, where we will stay overnight in a camp.

Reaching the Base Camp of Ama Dablam

Today we will trek to the base camp of Ama Dablam which is located at an elevation of 4,800 meters. Arriving at the base, we can see expedition teams of Ama Dablam as it is one of the beautiful peaks in the whole world. After exploring the peak, we will walk back to Dingboche along the main trail.

Descending further we walk along the trail which offers the stunning view of Everest, Lhotse and Nuptse ahead and Taweche on one side and Ama Dablam on other. Kantega, Thamserku, Khumblia and Kongde Ri also comes along the way. Today’s walk won’t be so challenging, so take your time to enjoy the mesmerizing view of mountains.

Leaving behind our footprints, we descend towards Namche Bazaar through Khumjung. Khumjung is a historical village where lies the school built by Sir Edmund Hillary himself. Along with Khumjung lies Khunde with a famous hospital established by Sir Edmund Hillary. Namche isn’t so far now, so take your time to explore this historic village. And don’t forget to visit the Khumjung monastery where yeti’s scalp is kept.